As the days went on while on Pickney ward, it always felt like progress was slow.  Trying to find the positives in any little step forward was always thwarted with what felt like a step backwards. There were weeks where her potassium levels would be too low, so Sophie had to drink this awful super salty pink liquid, enough to make you sick (and a few times it had that exact effect), then her potassium levels would be too high, so extra IV fluids and nebulisers were needed.  The one area where we could see progress was on the nasty wounds on her inner thighs.  As bad and as painful as they were, we could see how amazing the body is in repairing such deep damage to the skin.

Every week Sophie was getting a little stronger, the physio sessions were not exactly looked forward to, but necessary to get more independence back into her movement.  Now that Sophie was able to do more activities, the time spent with the Play Team was even more important.  Arts and craft projects kept Sophie busy in her room, then when she was strong enough for a little walk, we would go to the Play Room and play games from Frustration to Pool.

I can remember there being a time when we were thinking what will the next phase or step be? Right from the start we knew Sophie would move from St Georges to The Royal Marsden, but we were not sure.  Then suddenly one day we were told that the team were making plans to move Sophie in the next few days! There was a lot to do for the medical team, but over the two and a half months at St Georges, Sophie had accumulated quite a lot of stuff, not just arts and crafts, but dressing, wound care and all sorts.

Transfer day came and on the afternoon of the 20th January, 88 days after being admitted to St Georges, we made our way to The Royal Marsden Teenage Cancer Trust Ward, Sutton.  Emma and I got Sophie settled into the ward, she was in a room with four beds and a shared bathroom.  When we moved in, we were the only ones.  Our space had a wardrobe, pull down bed which was so much better than the sofa bed on Pickney Ward and lots of space.  The facilities were certainly much nicer.  The downside was that this was the height of the second COVID peak and The Royal Marsden is a COVID Green Hospital, i.e. any patient with COVID was moved to St Georges.  This meant that visiting restrictions were tight, in fact the entire ward was on lock down.  Only one parent could stay and they would stay for the immediate future. This was a bit of a shock as Emma and I had got into a rythm of swaping every day.  I made the case to do the first stint with Sophie and Emma went off home.

The first thing Sophie and I did once settled, ordered dinner... burger and chips, that's how you put a smile on a face! 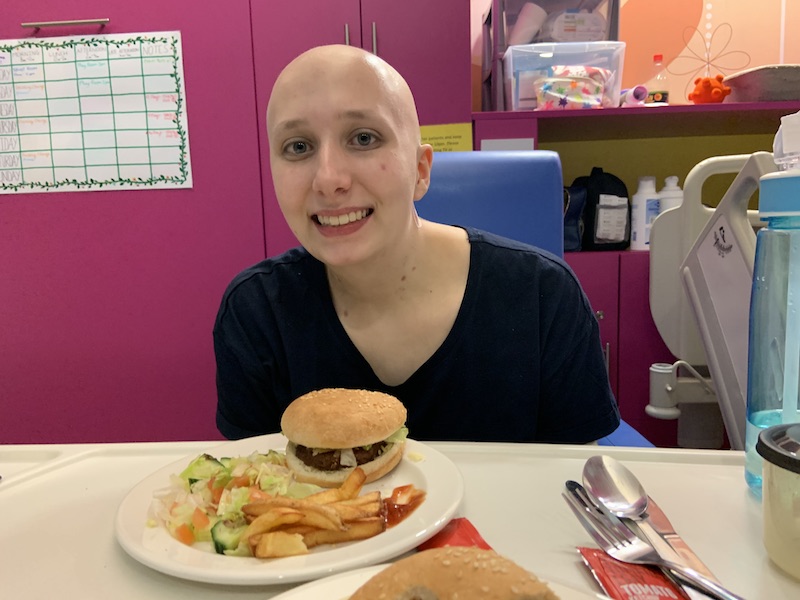