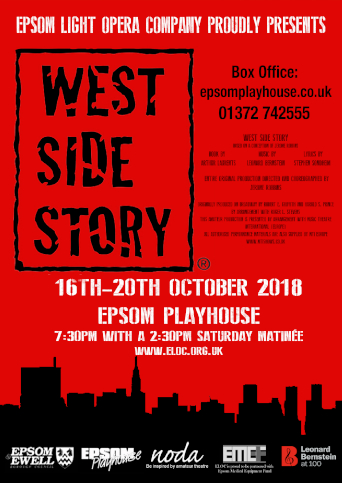 From the first notes to the final breath, West Side Story is one of the most memorable musicals and greatest love stories of all time.  Arthur Laurents' book remains as powerful, poignant and timely as ever.  The score by Leonard Bernstein and Stephen Sondheim is wodely regarded as one of the best ever written.  The world's greatest love story takes to the streets in this landmark Broadway musical that is one of the thratre's finest accomplishments.  The incredibly intricate score and extended dance sequences bring light and shade to the musical with well-known stand outs like 'Maria', 'America', 'Tonight', 'I Feel Pretty' and the hilarious 'Gee Officer Krupke' among many others.

Shakespeare's Romeo and Juliet is transported to 1950s New York City as two young, idealistic lovers find themselves caught between warring street gangs, the American 'Jets' and the Puerto Rican 'Sharks'.  Their struggle to survive in a world of hate, violence and prejudice is one of the most innovative, heart-wrenching and relevant musicals of our times.

at the Epsom Playhouse
Autumn 2018

Loosely based on Shakespeare’s Romeo and Juliet, the show uses the juvenile gangs of local, white Americans (the Jets) and immigrant Puerto Ricans (the Sharks) as its modern equivalents for the Montagues and the Capulets, whilst set in the urban slums of New York. They engage in bagle with childish seriousness over the streets in which they claim as their territory.

The Jets, boasqul and contemptuous of the immigrants, call on Tony, who used to be their leader but now has a regular job and is on his way to adulthood, to help their new leader Riff and the gang in a challenge to the Sharks. Riff reminds Tony of his old allegiance and of how menacing are the newcomers are. Tony agrees reluctantly but soon becomes excited with the thrill of poten:al combat.

Meanwhile in a bridal shop, Anita, the sweetheart of the Shark's leader, Bernado, is conver:ng Maria's communion dress into a gown for the dance that evening. Maria is Bernardo's sister, who has brought her from Puerto Rico hoping that she will marry his best friend, Chino.

At the dance, Riff challenges Bernado, and the groups agree to do bagle. Tony and Maria see each other for the first :me, and fall in love instantly, becoming oblivious to the menace that is building up around them.
Most of the Puerto Ricans are nervously elated over the coming conflict, but they are confident and determined to assimilate into the American way, despite the homesickness that some of them feel.

The threatening groups are dispersed by a policeman, but the separa:on is only temporary. What could have just been a game of muscle flexing turns to tragedy when Bernado provokes a knife-fight which results in Riff being killed. Bernado is murdered in turn by the avenging Tony. He flees to the home of Maria who has been told of the news of her brother's death by Chino. Her love for Tony overcomes her hatred for her brother's killer. Tony promises to take her away and in a dream ballet sequence the bagle is re-enacted, but this :me the lovers are not allowed to meet. The dream turns into a nightmare but Tony and Maria flee.

Elsewhere, the Jets are concerned with their inevitable encounter with the law, and mockingly imagine how they will deal with the situa:on. Anita taunts Maria for remaining faithful to Tony but nonetheless agrees to deliver Maria's message for Tony to the Jets. Unfortunately, the Jets threaten to abuse and rape Anita, driving her to falsely claim that Chino has shot and killed Maria. Hearing this, Tony, angry and wild with grief, goes ajer Chino. Tragically, Chino coolly shoots Tony just as he discovers that Maria is not dead ajer all. Somewhat ashamed, the Jets and the Sharks between them remove Tony's body as Maria follows them.

Photos from the Dress Rehearsal are available for viewing - click here

Local operatic company, Epsom Light Opera, took on the difficult task of bringing fresh quality to a show that first opened in America in 1957.

In a week where the Evening Standard reported how London knife crime “had hit its highest level ever recorded”, the timing of this show could not have been more relevant; the tragedy of urban gang warfare as pertinent now as it was sixty years ago.

The story follows the hostility between two rival gangs, the Jets and the Sharks, as they fight for supremacy of New York’s West Side. The all-American Jets, full of suspicion for their Puerto Rican enemies, reflect a Trumpesque xenophobia, fearing loss of jobs and national identity. But catastrophe only fully occurs when, in a mirroring of Romeo and Juliet, two people from the opposing sides fall in love.

The show’s two leads, Tony, played with a gentle maturity by Michael Leopold and Maria, portrayed to sweet, innocent perfection by Danielle Kerley, succeeded in bringing passion and depth to their forbidden and ultimately doomed, love. As the scenes swapped smoothly from tumult to romance, the juxtaposition between the beauty of their love and the ugliness of the streets was clear and fed a sense of imminent disaster.

It was never going to be easy for a troupe of untrained youths to dance effectively in fight scenes, but what some lacked in technique they made up for aplenty with enthusiasm and energy. Of particular note was Jet leader Riff, played by Matthew Howes, who had the unenviable task of “playing it cool” while having to spur on his fellows into conflict. His main rival, Bernado, depicted as an impassioned, spirited hot-head by Richard Qureshi, delivered the horrifying material with admirable distinction.

However, it was Charlie Qureshi’s Anita who stole every scene in which she appeared, being painted with precision as a fiery energetic tornado with a flawless Latin accent. Her near-rape scene made for uncomfortable viewing and led seamlessly into the devastating and moving finale.

Of the production as a whole, Epsom Light Opera managed to achieve a show that included the full range of emotion from laughter to tears with effective staging – the dream sequence was especially startling – and well sung musical pieces.

The only slight criticism from this reviewer would be the over-long delay in the music starting for several numbers. The orchestra were brought in too late on a few movements, leaving awkward pauses between speech and music. But this minor disparagement could not detract from a thoroughly entertaining and slickly presented performance.

On the strength of this show, ELO’s follow-up musical, Hot Mikado, next April, will be well worth seeing.

If ELOC chose this well loved show in the hope of attracting new and young members, they certainly succeeded. A host of new faces including the two lead players added lustre.

I should say at the outset that I am not one of this show's greatest fans. I find some of the discordant music vexacious and the overt violence unpleasant. However, I am in a small minority and fully recognise that "West Side Story" is widely regarded as a special musical and ahead of its time. which it was in some ways. I mention this only for reasons of context. There are, of course, some memorable songs, though for me "Maria" and its endless theme is overused.

At the heart of this Romeo and Juliet tale are two lovers from different "tribes", clinging to that love against near impossible odds.

The performance, as distinct from the show itself, was of a high standard. ELOC newcomer Danielle Kerley was a superb Maria with a thrilling soprano voice. Michael Leopold as Tony matched her all the way and this charismatic couple underpinned the story. Richard Qureshi as the unfortunate Bernado showed a huge stage presence as did Charlie Qureshi playing Anita - another with a strong singing voice.

What was deeply impressive was the very youthful and realistic age of all the Jets and also the Sharks, though some Sharks were a touch older. The same youthfulness applied to both Jets and Sharks girls and much dancing talent was plain for all to see and to appreciate. Choreographer Katie Leitch had clearly worked tirelessly on some stunning dance routines and the movements were crisp and sharp with good timing.

I thought the costumes and hair very appropriate and a strong impression of the period was achieved. The girl's costumes in particular were extremely good, well fitted and of a professional standard. Elizabeth Callow co-ordinated costumes and supplied some costumes, together with Laura Falconer and Triple C Hire.

The Dream sequence ballet all in white was beautifully staged and was a show highlight. Other outstanding act one scenes were these: "America" featuring all Shark girls and Anita and Rosalia (Emily Buck) and "Tonight" with Jets, Sharks, Anita, Tony , Riff (a fine performance throughout by Matthew Howes) and Bernardo.

A sparkling and special "I Feel Pretty" opened act two, featuring Maria with Rosalia, Consuelo and Francisca - these last two played by Philippa Kennedy and Lucinda Banton respectively - all with verve and fine musicality.

I liked the adult chorus "Somewhere" and liked "Gee, Officer Krupke" by all Jets even more, which perfectly encapsulated the hoodlum disrespect for maturity and the law. Len Martin did really well as Krupke and Chris Evans shoed a New York hard bitten worldliness to the fearsome Detective Schrank. Other effective cameos were given by Paul Hyde as Glad Hand and Charlie Hoddell as the Dress Shop owner. Finally, I would also mention the hothead Chino, played with passion by Russell Thompson.

The large Playhouse stage was used effectively to portray the starkness of this story of violence, hot emotion, love, courage, remorse and the Finale was achingly sad and movingly staged and performed.

Fight director was Matthew Howes (Riff) and his fine work was aided by the athletic youthfulness of both gangs. Stage Manager Sarah Wood and her crew ensured seamless transition from scene to scene.

Director Lisa Scott, though, must take the ultimate palm for her vision, pace throughout and for almost succeeding in making this reviewer, at long last, love this iconic show. It was not her fault that Leonard Bernstein got in her way, at least for my money! But the production was of a high order nevertheless and on the night I attended the audience clearly loved what they saw. I most definitely did too!