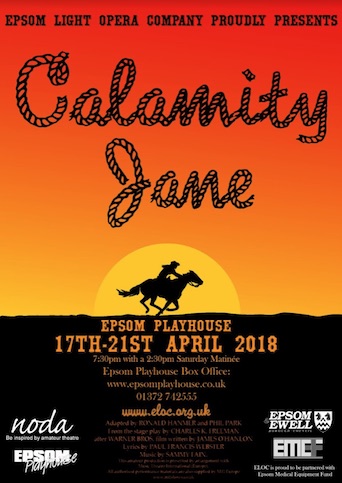 Whip crack away with this timeless classic, Let multi award winning Epsom Light Opera Company take you back to the black hills of Dakota for the ultimate tale of female empowerment and friendship set against the backdrop of the Wild West.  The themes of unrequited love, jealousy, companionship, sacrifice and ultimately falling in love are exploed beautifully in this 1950s classic musical.  Featuring the show stopping numbers: 'Just blew in from the Windy City', 'A Woman's Touch' and the ultimate love song, 'Secret Love', this really is a family favourite you will not want to miss.

at the Epsom Playhouse
Spring 2018

One of the legendary figures of the Old West, Calamity Jane lives in Deadwood and rides shotgun on the stage-coach between Deadwood and Chicago. She dresses as a man, drinks like a man and can shoot better than most men. Although there is an element of truth in her adventures, the number of Indians shot and brave soldiers saved by her have led the townspeople to feel that she is “careless with the truth”!

Despite her outward toughness she has fallen for Lieutenant Danny Gilmartin and also, to a lesser extent, Wild Bill Hickock, a gambler.
Henry Miller is the owner of the Golden Garter Saloon and is anxiously awaiting actress Frances Fryer booked to perform that night. His anxiety increases when she does not arrive on the stage-coach. Due to a booking error a song and dance man Francis Fryer arrives instead, not what Miller’s red blooded customers would want. To dispel a riot Miller persuades Fryer to do a female impersonation. This is a disaster but Calamity saves the day (and Miller’s hide) by promising the angry audience she will go to Chicago and fetch Adelaide Adams, a famous start of vaudeville.

In Chicago, Calamity mistakes Adelaide Adams’ maid, Katie Brown, for the great star. Stage-struck Katie seizes the chance to break into show business by agreeing to perform at the Golden Garter. Her impersonation of Adelaide flops, but Calamity calms the audience and, given a second chance, Katie performs her own act and becomes the toast of Deadwood.

Katie and Calamity become good friends and Katie moves into Calamity’s cabin in the beautiful Black Hills of Dakota. Danny and Bill have fallen for Katie and visit the cabin to seek her favour. A ball at Fort Scully promotes an opportunity for the four of them to go as a foursome, with Calamity in a borrowed gown, revealing her feminine side and becoming the belle of the ball.

Danny finds himself alone with Katie, and declares his love for her. Katie, although worried about Calamity, is overcome by passion and they fondly embrace and kiss. Calamity discovers them and flies into a rage, ordering Katie to get out of town.

Calamity sets back to her cabin to throw Katie’s belongings out, but on the trail with Wild Bill she discovers her “Secret Love” for him, and yes, you can guess, it all ends with wedding bells. But for how many weddings?

Photos from the Dress Rehearsal are available for viewing - click here

This much loved show featuring Doris Day and Howard Keel and full of haunting melodies has gone down in showbiz history as one of the great shows. To say that ELOC did full justice to this mighty show would be to understate things. This performance had all the requirements any lover of musicals could ever want.

Magnetic performances by the lead players and supporting roles; pace, panache and musicality from the lively and active chorus; crisp, lively dance routines and colourful, even sumptuous costumes aplenty.

Underpinning this thrilling production was the magnetic and slender figure of Emily Pike, Doris Day's young self come magically back to her peak as Calamity. This sassy, vibrant young lady was a real titan on stage, capturing every eye and every male heart! Playing opposite Doris, sorry Emily, was Barry Stevens, excellent and world weary as "Wild" Bill Hickock. As the glorious melodies in this mighty score came tumbling out one by one - and what a list they are - each was enacted with marvellous musicality and truth. Sammy Fain and Paul Francis Webster, music and lyric writers would have been proud of this performance.

To me as an older lover of real melodies, this musical was a rare treat, reminiscent of the days when all amateur theatre leads and supporting roles were expected to bring top quality singing to the roles.

David Edwards and his fourteen instrument by thirteen musicians band gave full rein to the marvellous music and David's control of dynamics was superb. I heard every word by all the soloists, which is not a regular occurrence. Sure footed sound by Stuart Vaughan played an important role throughout.

Lucinda Banton as Katie Brown, at first somewhat timid, as the character demands, blossomed into full throttle in both acting and singing as the crowd encouraged her. Her two duets with Calamity and with Bill were show highlights by all three players.

Other top performances were given by Stephen Chalkley as Lt. Danny Gilmartin, Max Marchesi as the "frightened" Francis Fryer - a peach of a performance - and the mesmeric Chris Evans as bar owner Henry Miller.

Nic Ash as Joe the Barman gave sterling support and showed his rich baritone voice and Dil Patel did equally well as "Doc" Pierce, as did Hannah Wade as Susan Miller.   Many other named characters, too many to credit individually, nevertheless made their various roles real individuals and added much lustre to their pacy, vibrant performances. Four Stage Door Johnies, well dressed apart from some unpolished black shoes, fêted the "superior" Adelaide Adams, played to the hilt by Rachel Yelland. I was sorry to see her leave, so polished was she!

I really cannot praise the ensemble too highly! Energy, life, pace and individual characters abounded in all company scenes. Energetic, really well rehearsed and some intricate dance routines by choreographer Dawn made a full contribution in so many scenes.

The saloon set was magnificently real, detailed and one really felt drawn in to the scene. Stage manager Sarah Wood, assisted by Richard Pike and their team worked wonders with slick changes. I also much liked the cabin and the transformation as if by magic!

Mighty show director James Fortune is well known as a top Magic Circle magician and his magic dust was showered all over this show. His groupings, slick changes with skilled use of highly atmospheric lighting under Simon Banks and his "spot on" team were from the very top drawer.

Other highlights - though the entire show was one long highlight - were the gorgeous and emotionally sung "Secret Love" by Emily, "Higher than a Hawk" by Barry, the umbrella dance scene with Max and magnificent girl dancers and "Windy City", including the reprise.

Costumes way above amateur standard were provided by Elizabeth Callow and Dress Circle, all co-ordinated most effectively by Elizabeth.

All in all a top rate show and ELOC have once again lived up to their top class and richly deserved reputation.

Click the video below to go behind the scenes at our recent promo photo shoot!

See some of the cast perform some of the great numbers from Calamity Jane live in Epsom Town Centre on Saturday 7th April 2018!